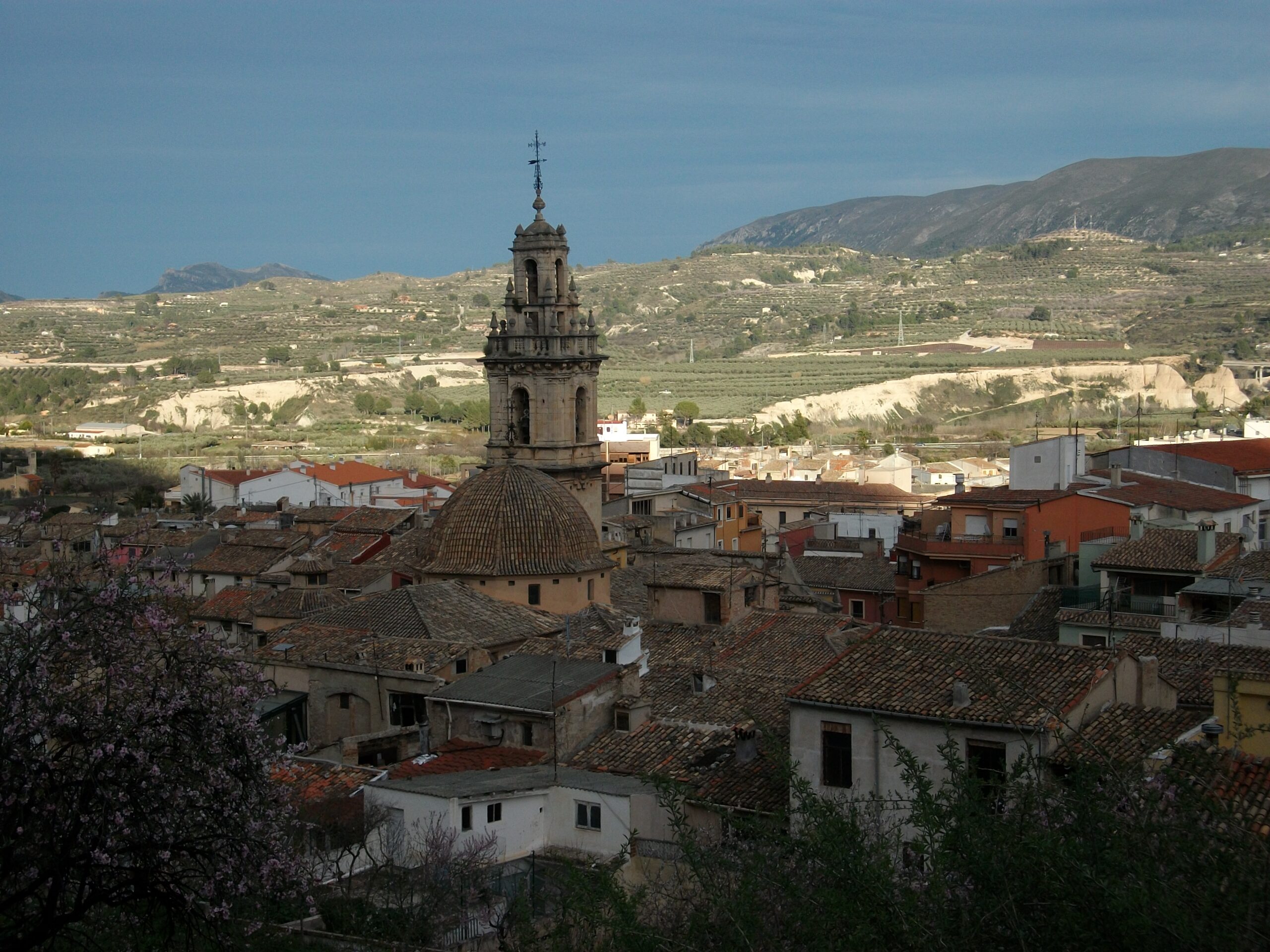 A Fred Flintstone like church, horror stories in the Gothic Room, a snake with a woman’s head…home of the socarrats.

You could be forgiven for driving straight through Cocentaina, thinking that it was little more than an industrial estate, which is probably why the town rarely rates a mention in most tourist guides. Like many of these small mountain towns though, it hides a surprisingly historic little heart hidden behind all those factory units flogging textiles and furniture.

Cocentaina is a modest little place of just over 11,000 persons, but towards the end of the 11th century it was the capital of a large Islamic region that covered the entire northern part of present-day Alicante province. Around the mid-12th century the Christians began their conquest of the town, and in 1258 Jaime I wandered in as its saviour for God. Less than 50 years later, in 1304, Moslems from Granada got their own back by sacking the town and virtually burning it to the ground, earning the locals the soubriquet of socarrats, the scorched ones.

The historic part of the town is divided into two definite areas, El Raval, the ancient Moslem neighbourhood, and  La Vila, the part inside the walls that protected the Christians from the heathenish Moors. While the streets of El Raval rise in terraces up the hill in the direction of the Ermita Santa Barbara, most of the architectural and historical life lies in La Vila.

The epicentre of Cocentaina was the Palau Comtal, historic home of the Corella family, whose crest features a woman’s head atop the body of a serpent, fortunately lacking an apple, which would at least have got Adam off the hook. When the Countess Corella took over the building she wasn’t happy with the Gothic appearance so Rennaisance-ised the whole place, with lots of painted and carved ceilings, ornate tiled floors and columned arches. And it must be admitted that she did a pretty good job.

The Sala Embajadores is exquisite, with its stunning ceramic tiles and carved panelled ceiling, and the Sala Dorada has a painted ceiling that has to be seen to be believed. Panels depicting the Kings of Navarra (the Countess’s family) are surrounded with scenes of the battles between Moors and Christians, the most famous being that of Jaime I sitting on a hilltop prior to his successful invasion of Valencia City.

(A little known historical fact that has yet to make its way into the guidebooks. The small room you enter on your way to the Sala Embajadores used to be a bar until the latter years of the 20th century, known as Sancho’s Bar. It was here that the coffee liqueur, now served throughout the Valencian Community, was invented. If you have ever tasted it you will know that some things cannot be forgiven.)

In the cloistered cool below these glorious rooms is the newly installed public library, which must be one of the most beautiful in the region. If the tourist information office is closed you can pick up leaflets here, and if you fancy a read, the library has a small English section. I picked up a small paperback of ‘Tales of Horror’ by Bram Stoker, and as I flicked through the pages the words “…and the kitten died immediately” leapt out. Suitably Gothic in what was originally known as the Gothic Room.

Adjoining the Palau, the Convento Y Monasterio de la Virgen del Milagro is a haven of ornate intimacy, the sort of church were people pop in and out for a quick word with the Almighty while doing their shopping. The decoration and artistic embellishment is worthy of a cathedral, tucked into a place that, when packed, could hardly accommodate more than a couple of hundred souls. Like many Spanish churches, ornate paintwork covers large areas of the walls, but here huge sections are painted to imitate irregular stone blocks, the overall effect being of a slightly kitsch rustic church with a nod in the direction of decadence. Fred Flintstone would have felt at home. Fat cherubim sit high up on ledges over the alter, serenading on lute and harp, while their friends hold up the heavy curtain that would otherwise stop the white dove bursting through the gilded sunbeams high on the retablo. This is glorification of the faith done with a sense of humour.

Cocentaina isn’t short of magnificent edifices to while away the hours in, but the tiny, twisting streets have a magnificent charm. Sneaky little alleyways lead to dead ends or worn steps that disappear under Mussleman high-rises, leading you forward in an Alice in Wonderland sort of way.

The streets are profuse with beautifully painted plaques depicting the lives of saints and religious goings on. Just around the corner from the Iglesia Santa Maria, a small sign at the bottom of a flight of stone steps that lead up to Calle Mare de Déu de Miracle, warns that ‘Paso prohibido para caballerias’ (No horse riders allowed), which seems a little unfair as directly in front of the you is a beautiful tiled panel in praise of ‘St Jaime Apostel, Patron de España’ vanquishing the scimitar rattling Moorish hordes while seated on a white charger with a cross in one hand and a sword in the other. You’d think this is the very spot where horses would be welcome!

If you go up the steps onto Calle Mare de Déu de Miracle (with or without your horse) and turn left, you will come across the oldest ceramic panels in Cocentaina. They date from the mid-18th century and represent the suffering of the Virgin, giving their name to the street where they are located. Each one is entitled ‘Primer dolor’, ‘Segund dolor’ etc., and as the number of pains or sufferings increase the Virgin is seen with an additional mighty sword plunged into her breast.

On the third Wednesday of Lent, the neighbors of the Raval get a chance to poke fun at local and national politicians, when they set out stuffed grotesque figures, nanos, in the street, criticising the political shenanigans of the winter. They are meant to be anonymous, but locals watch over them like naughty children waiting to laugh at a prank.

Keeping a watchful eye over the town is the Castillo, a recently restored castle. More a castle tower really, this emblem of Cocentaina was built in the first Gothic military style sometime between the 13th and 14th centuries. You can reach the Castillo by car – if you have the temerity for a near vertical climb. The road begins just by the gate to the Chapel of San Cristobal, or Sant Cristofal, or San Cristoval – all names for the same place – but it might be an idea to just make the most of view from the picnic area around the chapel where you can have your bocadillo sitting on stone blocks with a huge stone slab as a table, and with the aroma of rosemary in the air – but it would be advisable to take a cushion!

Cocentaina the sort of place where people wish you ‘Bon Dia’ in the street (Valenciano is still the main tongue) and if someone sees you studying a map they will offer you directions and probably take you there; where old ladies supplement their pensions by selling fruit from their own orchards outside their front door, and where the library staff are so trusting (all one of them) that they nip out and sit on the step for a fag break without worrying that you’ll wander off with Brad Stoker’s scary tales. If you ignore the hustle and bustle and industrial architecture that welcomes you to the town, Cocentaina is an oyster worth cracking open to find the little pearl inside.