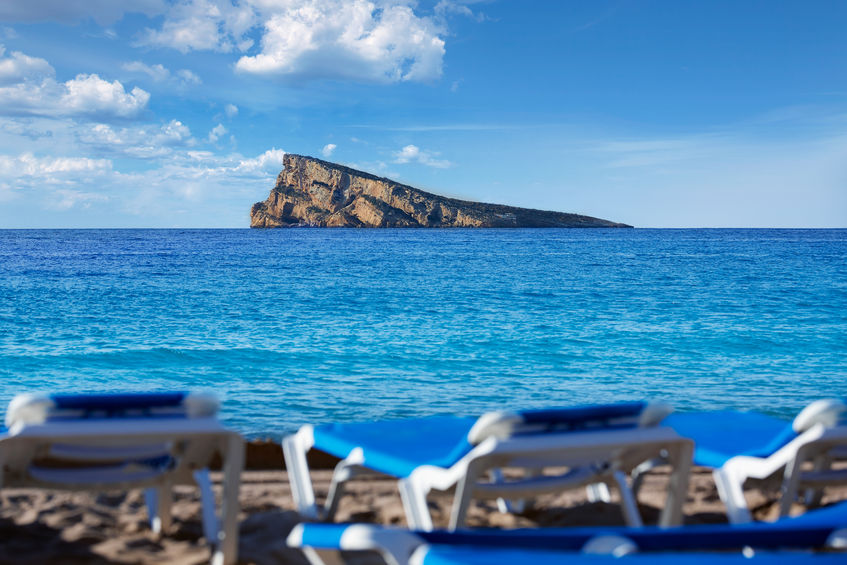 Say anything loud, fast, and often enough, and people will believe you. Benidorm has suffered badly because of this. Let’s dispel some myths.

Many people still think that Europe’s most popular resort is elbow to elbow Union Jack shorts slung below bulging pink beer bellies. While this may have briefly been the case in the 70’s and 80’s when British tour companies flooded the resort with a fortnight’s holiday all-in for £3.10s, it was a relatively short-lived phenomenon. To be fair, ‘Benidorm’ and ‘culture’ are as likely to be seen in the same sentence as ‘Lady Godiva’ and ‘short back and sides’ a, and there is still a fair acreage of bleached white skin on display during the high season, but the common-as-muck image disappeared long ago – except for in the British press – and Benidorm is a pleasant resort that has something for everyone. There are so many myths about Benidorm bandied about that it might be useful to dispel some of them. 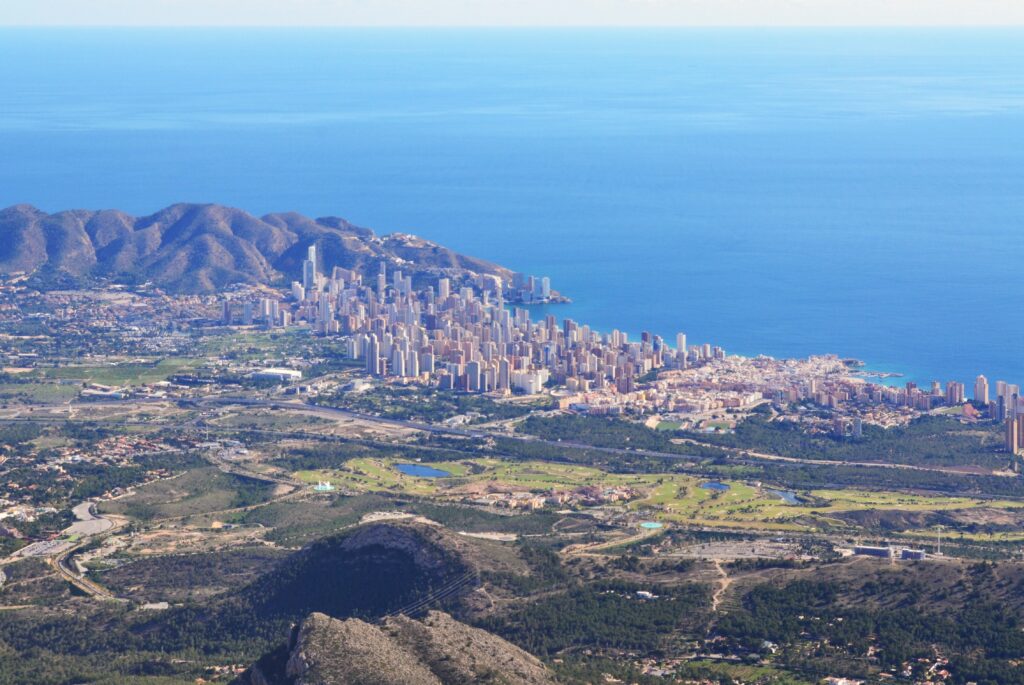 Benidorm was a fishing village before the tourist boom. This is perhaps the pearl of all duff quotes and has been repeated so often that it has now become accepted as fact. Benidorm never was a fishing port – the harbour is too shallow, but the history of the resort has always been linked with the sea. It did have the almadraba, though, a form of fishing for tuna handed down from the Arabs at which the Benidormense reined supreme. The town also provided many of the captains and crews of the Spanish Merchant fleet, whose experience of dealing with a wide spectrum of nationalities during their travels worldwide held them in good stead when the world reversed itself and began to arrive on their beach front.

Benidorm is wall-to-wall high-rise apartments. In 1954 Pedro Zaragoza Orts, the then young Mayor of Benidorm, created an urban plan that ensured that every building was surrounded by an area of ‘leisure’ land, guaranteeing a future free of the excesses of cramped construction seen in other areas of Spain. It is the only city in Spain that still adheres to this rigid rule, and if you climb to the top of the Sierra Helada, the promontory at the end of the Rincon de Loix, you get a wonderful view of how green the city s and just how close it is to the mountains. I’ve never heard anyone complain about the high-rises of New York – and that doesn’t even have a decent beach! 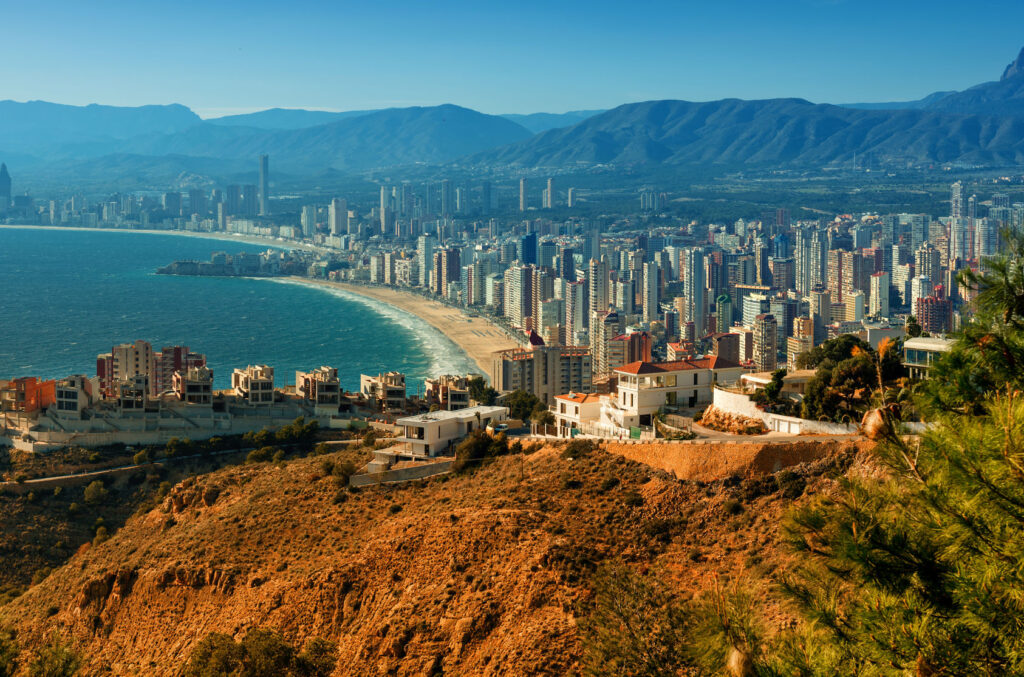 In Benidorm, with it’s population of ….. million Brits, you barely hear a Spanish accent. Stick any number you like on the dotted line because I’ve seen almost every number between half a million and three million used. It’s actual total residential population is slightly over 71,000, and Benidorm itself actually has very few permanent expat residents. When the resort began its phenomenal rise during the 60’s, 70’s and 80’s it attracted workers from all over Spain, many of whom set up small regional communities in the city. It is, and always has been, the major resort for internal tourism (in the late 19th century it was known as la playa de Madrid – Madrid’s beach – because of the amount of Madrileños who spent their holidays there, and still do. Far from never hearing a Spanish accent, you can hear virtually every accent, dialect and language of Spain, and each region celebrates its own fiestas, so Benidorm is never short of a party.

Benidorm has to import sand from Morocco to maintain its beaches. This little gem originated when a tour rep made a joke to his clients while on the coach bringing them from Alicante Airport to their hotel in Benidorm in the early 70s. Unfortunately his comment passed into media history. The resort’s seven kilometres of silky soft sand are absolutely natural, and the city is actually an exporter that supplies high-grade sand to a number of the local resorts. Benidorm spends more on keeping just its beaches clean than most cities do for all their streets. Imagine how many bags of sand you would need to mix with cement to lay the floor of a small garage and you will realise how farcical the idea is of topping up Benidorm’s beaches on a regular basis. 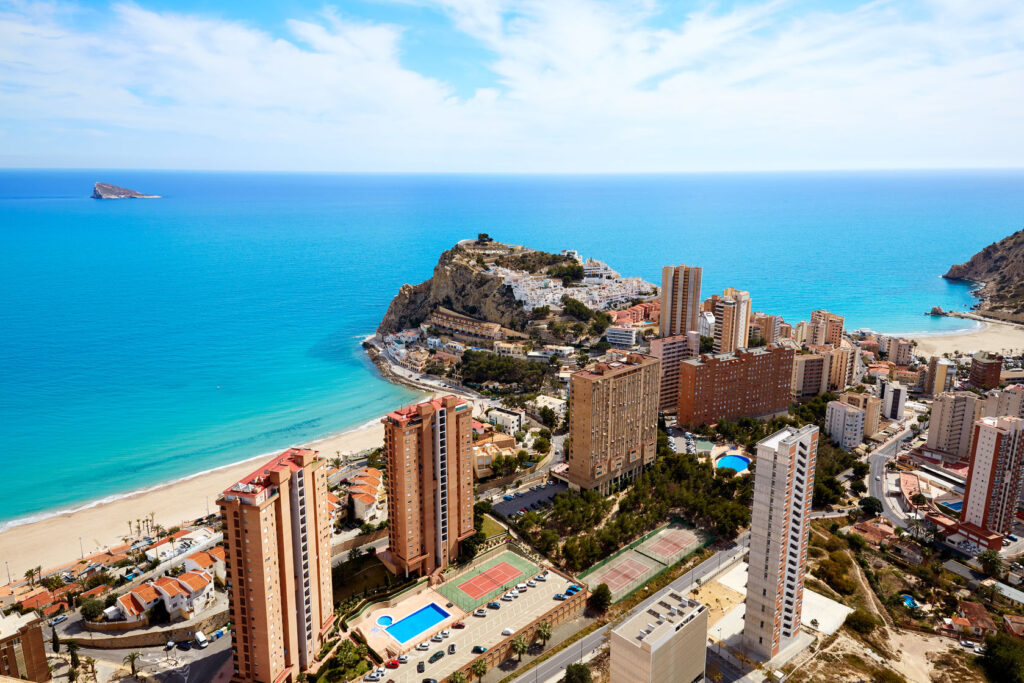 It’s worth bearing in mind a couple of points that rarely get into the press, particularly the dear old lazy British media who prefer to slag the resort off.

Star-studded. Benidorm has more hotel stars than the whole of Greece. As much as the seven kilometres of beach and three hundred and odd days of sun each year, it’s the high level of hotel service and value that has helped to maintain the resort’s position as the top holiday destination in Europe.

Micro-climate. The Puig Campana, the ring of mountains that form a back-drop to the resort, also keep out the chill winds and heavy storms. The micro-climate that this protection provides is one of the major factors that makes Benidorm a year-round tourist destination. This means that unlike many areas, none of the hotels close during the winter months, and most of them offer exceptional deals to maintain high occupancy. Pensioners from northern Europe take advantage of these offers to spend a couple of months or more away from the chill of northern climes.